In 1969, thirty acres of land was purchased off Rebeck Road, which would later become Floodway Gardens. George and Lois Reenders bought the land intending to grow vegetables part time, while George maintained his job as a teacher. Vegetable farming was in the Reenders family for generations. After coming to Canada from Holland, George’s father Marten grew vegetables in North Kildonan where Reenders Drive and the Revenue Canada taxation centre currently stand. 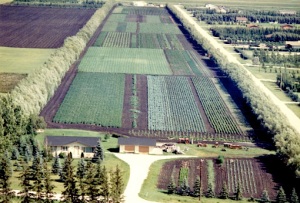 George Reenders began farming in 1971 and Shalom Path was built a few years later, allowing road access down the length of the property. George did not feel comfortable with the conventional methods of farming which promoted the use of chemical fertilizers, weed killers and pesticides. He researched organic methods and became convinced this was the way he wanted to grow crops and changed his growing methods accordingly. He built up his land by tilling in cover crops (green manure), adding earthworms and hauling in truckloads of animal manure. Weeds were controlled manually by cultivating, hoeing and hand weeding.

In 1975, George decided to sell his vegetables himself, rather than through wholesalers. He resigned from his school teaching position and began Floodway Gardens U-Pick Vegetables. A checkout stand was built, irrigation was added, signs were created and ads were placed in newspapers. Business increased mostly by word of mouth. Over the years, many crop varieties were trialed and evaluated for hardiness, practicality for picking and for customer demand. Also over this time, four-acre lots were subdivided as George and Lois fine-tuned the operation and looked ahead to retirement. After twenty-eight years of farming, they retired in 1997 and sold their remaining lot to their son Roland and wife Joan.

In 1998 Floodway Gardens was closed while Roland and Joan built a house on the property. Rye, a soil-enriching cover crop, was seeded and tilled into the land.

Floodway Gardens U-pick re-opened in 1999 and was certified organic from 2000 – 2008. After 2008, we voluntarily decided not to pursue certified organic status due to burden of added administration and paperwork. However, the commitment to grow crops naturally remains a fundamental priority of the business. Floodway Gardens continues to serve its customers by growing quality vegetables without the use of synthetic fertilizers, herbicides, pesticides or genetically modified organisms (GMO) as it has since 1975. 2020 will mark Floodway Gardens’ 45th year.

Follow us on Facebook to get instant updates. We provide regular updates to the website, Facebook and phone message during the picking season. It is best to check for updates and picking conditions before you come. Call 204-661-9162.

For everyone’s safety, customers must wash or sanitize their hands before entering the garden and practice physical distancing. We are encouraging cashless transactions for payment and we accept debit, Visa and Mastercard. We can provide bags or you  may bring  your own containers. We have digging forks for root vegetables or you may bring your own.